A one-day meeting to mark the 75 years of scientific and technological development since the discovery of polyethylene was held at the Science Museum London on the 27the March 2008. This was exactly 75 years to the day that the polymer was discovered by Reginald Gibson and Eric Fawcett in the Winnington Laboratories of ICI Alkali Division near Northwich, Cheshire. (see NW Chemistry News, March 2005. p6). 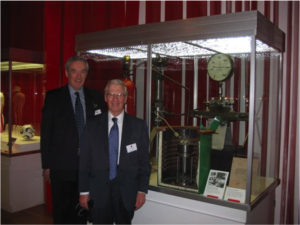 At the meeting, organised jointly by the Macro Group of the RSC and the Polymer Physics Group of the Institue of Physics, Dr Harold Fielding gave the opening talk on the Discovery and early history of polyethylene. This presentation, based mainly on archived material was well received. Further papers reflected on past successes and explored future challenges in both the manufacture and applications of polyethylene polymers.

The meeting adjourned briefly to allow a visit to the Plastics Exhibition on display in the Science Museum, where one exhibit reconstructed the original high pressure experiment when polyethylene was first isolated. The photograph shows Harold Fielding with Ron Gibson, son of Reginald Gibson whose notebook recorded the ‘waxy solid found in reaction tube’.

Interestingly, on 26 March 2008, The Independent published an article questioning the fact that the discovery of polyethylene was being celebrated, explaining some of the environmental problems arising from the 50 million tonnes of polymer produced world-wide every year. A reply from the meeting organisers was published, emphasising the many benefits attributed to polyethylene, from water pipes and cable insulation to hip replacement joints.

A further meeting to celebrate the 75th Anniversary is on 24th October 2008 at the Royal Society, London, organised by the British Plastics Federation and the Plastics Historical Society. More information is available from Colin Richards (tel. 01372 452320) or John Russesll (tel. 01276 26195).