Alderley Park, the Cheshire research and development centre of AstraZeneca, was awarded Chemical Landmark status by the RSC during an inaugural meeting for 200 cancer specialists in AstraZeneca’s new conference facilities on Monday, 22 September 2008.

Employing more than 66,000 employees worldwide, AstraZeneca is one of the world’s major pharmaceutical companies and a leader in developing and marketing therapeutic strategies in the areas of cancer, cardiovascular, gastrointestinal, infection, neuroscience and respiratory.

Alderley Park, which employs over 4,500 staff, 3,500 as scientists, has an unbroken chain of innovation which has employed chemical research for over 50 years.  Two of the most notable areas of discovery are beta blockers and cancer treatments.

Propranol and other beta-blockers were developed from the work of Sir James Black, in receptor research, and have gone on to benefit millions of people worldwide.

Hormone based cancer treatments originated as a by-product of fertility research and created entirely new ways of treating cancer. Tamoxifen was derived from this work and went on to change the way breast cancer is treated. The chain of research then went on to produce further anti-cancer drugs, Faslodex, Arimidex and Zoladex, which were discovered at Alderley Park and have benefitted millions of patients each year.    In 1957, when the Cheshire research centre was first opened, a woman who developed breast cancer had a less than 70% chance of surviving more than five years, today she now has a 90% chance of survival. 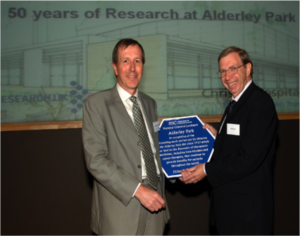 Presenting the Chemical landmark plaque to Dr Les Hughes, AstraZeneca Global VP Cancer and Infection Research Area, RSC President, Professor David Garner, paid tribute to the work of scientists at AstraZeneca.  He said “the RSC was particularly delighted to make the Chemical Landmark to industry as many of the previous landmark awards had been for research discoveries in universities. This award acknowledges the importance of the work of scientists in industry in bringing these products to the marketplace to the benefit of millions of people worldwide”.