On 7 June 2007, the Royal Society of Chemistry (RSC) honoured John Dalton, Cumbrian scientist and Quaker who revolutionised Chemistry through his Atomic Theory.  Professor Paul O’Brien, Head of School of Chemistry the University of Manchester and RSC Council member presented the RSC Chemical Landmark plaque to Professor Michael Lappert, Fellow of the RSC and owner of John Dalton Cottage in Eaglesfield near Cockermouth, Cumbria.   Professor Lappert gave a talk about John Dalton’s early life and regular visits to his beloved Lakeland and his scientific discoveries mostly recorded in Manchester.  About fifty guests attended the ceremony including representatives from the Manchester Literary and Philosophical Society, Cumbria Local History Federation, Cockermouth Civic Trust, Kirkgate Museum Group, Keswick Museum, Kendal Library, Portico Library, Manchester, RSC representatives and residents of Eaglesfield. The guests were kindly shown round the cottage by Professor Lappert and his wife Lorna. 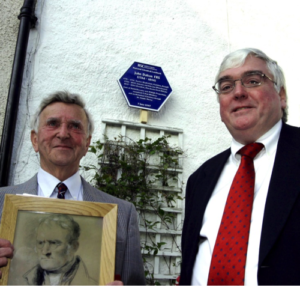 The ceremony then continued in the Trout Hotel, Cockermouth where Dr John Hudson, RSC Historical Chemistry Group and Mr Peter Barnes, Manchester Literary and Philosophical Society gave further talks about John Dalton and his life and work.  Mr Charles Lawson also spoke about his family life in John Dalton cottage as a nine year old. Mr Lawson was the first resident to switch on the power in the village of Eaglesfield when the Queen switched on the first electricity generated at the nuclear power plant Windscale (now called Sellafield) in 1956.

Dalton’s greatest achievement was his Atomic Theory first presented to the Manchester Literary & Philosophical Society in 1803, which established the principles that determine the composition of all materials. Atomic Theory marked the end of alchemy and provided the basis of all subsequent chemical investigations.

He was also the first person to recognise and describe colour-blindness, and the term Daltonism, from which he suffered, is still employed today.

Dalton’s revelations concerning the atom stemmed from his fascination with weather, as he recorded atmospheric conditions daily throughout his life – when weather commentators say “since records began” they are referring to Dalton’s 57-year practice of meteorological note-taking.

A Quaker by upbringing, modesty prevented him enjoying the adulation offered in his own lifetime. Upon his death the funeral crowds in Manchester, where he worked for many years, numbered 40,000.

The 17th century John Dalton Cottage will be eventually be left to the National Trust.

Regarding the note below, there is now an interesting sideline to this story. Fifty years ago years ago when the Queen inaugurated the Windscale nuclear facility, not far from John Dalton’s cottage, a nine-year-old boy who lived in the cottage was pictured by the press switching on a light to introduce atomic power to the house, thus linking the discoverer of the atom (and former inhabitant of the cottage) to the atomic energy age. Mr Lawson, of farming stock, still lives in the area and will be back at the cottage tomorrow half a century on to see a plaque go up. This might make an interesting picture aspect to the story.

Given the current debate about future nuclear energy for the UK, and the related climate change issue, this event (below) on Thursday might offer an offbeat story with an historical angle. The tiny Cumbrian cottage, where the plaque ceremony honouring John Dalton will happen, could be said to be the place where the nuclear age began.

John Dalton was a modest Quaker teacher and amateur meteorologist whose labours to produce Atomic Theory changed the world. His legacy included the North-West nuclear industry which, coincidentally, was later to appear not far from his home.