Unveiling the plaque, Mr Brian Lorenzini, Avecia Headquarters Site and Property Manager, said that although there had been a delay in arranging the Landmark ceremony due to the restructuring and divestments of the Avecia businesses, they were delighted to be receiving the award in the same year that the dyestuffs industry was also celebrating the150th anniversary year of the discovery of the first synthetic dye, mauveine, by Sir William Perkin.

Dr Ilesh Bidd, Vice-President, Research and Technology, Fujifilm Imaging Colorants Limited, gave an enthralling presentation entitled ‘From Dyestuffs to Diversity’ tracing back the origins of the Blackley dye industry through to today’s businesses on site. A fascinating fact to emerge was that ‘Turkey Red’ dye came from the translation of the red dye from India (d’inde) into the French dinde or turkey in English 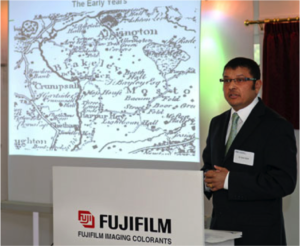 Hexagon Site is the sixteenth Chemical Landmark awarded by the RSC
The plaque will be on display in the foyer of Hexagon Tower on the Hexagon Site. The wording reads:
Hexagon Site

This plaque recognises Hexagon Site as a Chemical Landmark.
Since 1786, this site has been at the heart of dyestuffs development and production in the UK.