ICI scientists, Reginald Gibson and Eric Fawcett, set up an experiment on Friday, 24 March1933 in which a mixture of ethylene and benzaldehyde was heated to 170 degrees centigrade using apparatus devised by Dutch physicist, Anton Michels, which could submit materials to a pressure of 1,700 atm. A waxy solid was found in the reaction tube on the following Monday, 27 March which was later identified as a polymer of ethylene. Due to the unpredictability of the reaction, this experiment was not successfully repeated until 1937 when Michael Perrin used improved equipment to carry out reproducible polymerisation. In 1937 a 10 ton/year pilot plant was opened followed by a 100ton/year which started on the first day of WW2. Its first use was as lightweight compact insulators in air and ship borne radar that enabled Britain to win the Battle of the Atlantic. Today its main use is disposable packaging and in a multitude of plastic goods.

Professor Tony Ledwith hosted the historic chemical landmark event on behalf of the RSC at Winnington Hall, which is close to the site of the original Winnington Laboratory. Mr Harold Fielding, a former employee at Winnington Laboratory, gave a presentation on the discovery of polythene and then showed a short video made in the 1950’s reconstructing how the discovery was made which was kindly loaned to the RSC by Catalyst.

Former ICI employees who were involved in the polythene research, Mr Frank Bebbington, Mr Leslie Seed and Mr Cliff Salt, shared some of their reminiscences with guests at the ceremony. The Mayor, Councillor Ann Hooker and her consort, Mr Roy Hooker, were delighted to have been invited as both also had some memories and involvement in the polymer business at Winnington. 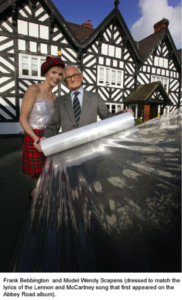 The inscription on the plaque reads:
Winnington Laboratory
This plaque commemorates the
discovery of polyethylene (better known as polythene) by R O Gibson and E W Fawcett on 27 March 1933 working in the former ICI research
laboratory close to this site