Posted on 3rd March 2005 by rscadmin| Comments Off on Polythethylene

Professor Tony Ledwith, past RSC President, hosted the event, attended by the Mayor of Vale Royal and her consort, together with around 35 guests. They included members of the Manchester local section, ex ICI employees and representatives of the Northwich Heritage Society. Special guests included 94 year old Frank Bebbington, who was working in the laboratories when polythene was discovered, 82 year old Leslie Seed and 88 year old Cliff Salt, both of whom worked in the early development of the new polymer. 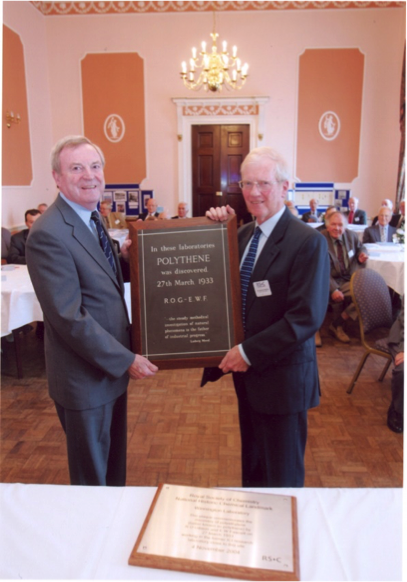 After a brief introduction by Professor John Leach, Dr Harold Fielding presented a history of the discovery and development of polythene.

On 27 March 1933 a ‘waxy solid’ was isolated following a reaction in which benzaldehyde and ethylene had been heated at 170°C at 2000 atmospheres pressure.

The ‘waxy solid’ was a polymer of ethylene and in the following years the potentially explosive polymerisation was tamed and scaled up to become the world’s largest selling polymer. The presentation emphasised the importance of polythene as an insulator for RADAR. The product became available on a commercial scale just in time to give the Allies and outstanding advantage both at sea and in the air.

A short film made by ICI in 1950 was shown on video, re-enacting the discovery. Frank Bebbington, who was involved in the early research, commented on the video and Leslie Seed recalled some of the problems and successes leading to the commercial launch of the new polymer.

Professor Ledwith, who reminded the audience of his own early interests in polythene polymerisation using organo-metallic catalysts, then presided over the unveiling ceremony, an honour carried out by Frank Bebbington. The Landmark was handed to Mark Roberts, manager of Winnington Hall, where the Landmark will be located. Harold Fielding then presented the ICI Commemorative plaque, previously located in the Winnington Laboratories, to the manager to be displayed alongside the RSC Landmark.

Guests then enjoyed a buffet lunch and display of memorabilia in the splendid surroundings of Winnington Hall.
Many of the guests then enjoyed a visit to the nearby building which once housed the Winnington Laboratories.
I would like to record my thanks to all those involved and especially to Pauline Meakins for co-ordinating the event.