Posted on 3rd March 2012 by rscadmin| Comments Off on Halothane

The Royal Society of Chemistry, the UK Professional Body for chemical scientists, honoured the work of research scientist Charles Suckling and his team by awarding a Chemical Landmark Plaque to Catalyst Science Discovery Centre at a presentation ceremony on Saturday 22ndOctober.

Whilst working at the ICI General Chemicals Research Laboratories in Widnes , Charles Suckling and his team developed an inhalation anaesthetic called halothane which, between the early 1960s and the 1980s, became the world’s most successful and most used anaesthetic.

Members of the RSC, trustees, sponsors, friends and local dignitaries were welcomed to Catalyst by Trustee, Dr Jenny Clucas who said “It is a great honour to accept this award on behalf of Catalyst in this, the International Year of Chemistry and I am delighted that Professor Colin Suckling, son of Charles Suckling and his family were able to join us on this special occasion. The breakthrough that the team made here in Widnes , helped to revolutionise surgical procedures across the world and Catalyst will be thrilled to display the blue plaque on the front of the building.”

Professor Colin Suckling delivered a short presentation about the history of halothane, its development in the research laboratories and the subsequent impact that it had on him personally and throughout the medical profession. He said that his father was extremely proud that he and his team were being honoured in this way.

Presenting the award, RSC Executive, Professor Paul O’Brien said “Chemical Landmarks are the Royal Society of Chemistry’s official recognition of historical sites where important chemical breakthroughs have been made and are an RSC initiative to commemorate, emphasise and awaken public interest in historic developments in the chemical sciences. 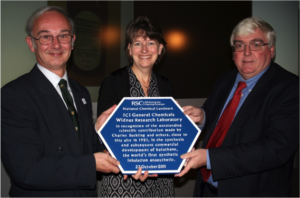 Although the actual laboratory where halothane was developed has sadly been demolished the RSC are proud to award the plaque to Catalyst as this building was close to the site and was also used by ICI as the Tower Laboratory.”

The plaque was formally presented to Dr Jenny Clucas before being installed and unveiled by Professor Colin Suckling and distinguished guest, Professor Martyn Poliakoff from Nottingham University and the Royal Society’s Foreign Secretary.

As a tribute to the work undertaken by Charles Suckling and his team, Catalyst has installed a permanent exhibition about anaesthetics, the development of halothane and the impact that it had across the world.

You can find out more about Catalyst by visiting the website at www.catalyst.org.uk