A Celebration of the 75th anniversary of Polyethylene

A Celebration of the 75thAnniversary of Polyethylene

Following the event held at the Science Museum London in March (see NW Chemistry News, September 2008, page 11), the Plastics Historical Society and the British Plastics Federation held their own meeting at the Royal Society London on 24thOctober 2008, to celebrate the discovery.

This special event, chaired by Sir Robert Malpas and Sir Geoffrey Allen commemorated the discovery of polyethylene by Fawcett and Gibson of ICI 75years ago.  The meeting illustrated the profound impact that polyethylene in its various forms has made on many aspects of modern living.

Dr Harold Fielding contributed to Dr John Russell’s opening presentation on the discovery and early development of polyethylene, including the showing of an ICI film, made in 1950, which reconstructed the discovery.  Other presentations recorded the outstanding contribution polyethylene made to the success of RADAR in World War 2 and discussed both the original ICI high pressure process (licensed worldwide) and the more recent low pressure routes.

Other applications were also covered from packaging and films to gas and water pipes to cable insulation and power cables. Together with contributions on marketing, licensing and future sustainability, the meeting made an outstanding commemoration of the polythene story.

Around 100 delegates and speakers were involved, giving many opportunities to contribute to numerous lively discussions and to renew past acquaintances. 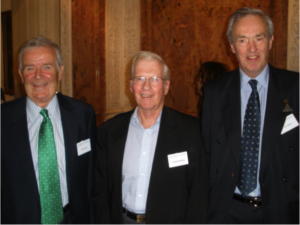 All in all the meeting provided a fitting commemoration of the important discovery 75 years ago.